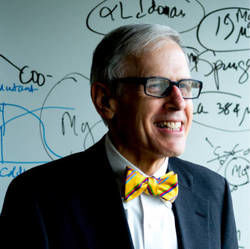 A New Pre-Hospital Therapy to Treat a Heart Attack

“It was 1970, and I was a fourth-year medical student at New York University School of Medicine on a neurology rotation. One of the patients who’d had a stroke had an artificial heart valve,” Dr. Coller recalls. As he began researching more about the patient’s treatment with the anticoagulant drug warfarin, he started to dig deeper into the role of platelets – the blood component responsible for clotting – in stroke.

Dr. Coller was intrigued, particularly because researchers at the time knew little about platelets and their activity. His quest for more information eventually led him to Marjorie Zucker, PhD, an internationally renowned platelet expert at NYU. Under her tutelage, he studied a platelet test that became the basis in 1971 of his first published scientific paper, co-authored with Dr. Zucker when he was just a year out of medical school.

That experience sowed the seeds of his passion for research and a lifelong fascination with platelets and their role in heart disease and stroke.

Four decades later, the fascination continues. As a Harrington Scholar-Innovator, he envisions a totally new approach to prehospital treatment for heart attack based on his small molecule RUC-4, which prevents platelets from aggregating and initiating clots. “RUC-4 is extremely soluble and so could be given by auto-injector by emergency medical service personnel to a person having a heart attack, thus preventing further heart damage,” Dr. Coller says, explaining his eventual plan for the compound. But support for projects at this early stage, Dr. Coller knows, is hard to come by. “We have not had a lot of exposure to industry, and the economic model for this compound is complex,” he notes. “We need a business model that will make it possible to partner with a large pharmaceutical company for Phase II and III studies.” He is hopeful that the Harrington Discovery Institute, Innovation Support Center and BioMotiv will help him make those connections.

In the ensuing years between that first paper in 1971 and the RUC-4 project, Dr. Coller has learned to accept the challenges of research. “When you get to an obstacle, you have to choose whether to go over, around, under or through it,” he says.

His first experience with drug discovery and development put that perseverance to the test. It began in 1981 with his discovery of a monoclonal antibody that blocks platelet binding sites to prevent blood clotting. That discovery led to 14 years of basic research, clinical testing and regulatory submissions in collaboration with scientists at Centocor. The U.S. Food and Drug Administration approved abciximab, the drug based on Dr. Coller’s discovery, in 1994. It is used around the world to prevent platelets from initiating blood clots in high-risk patients undergoing metal stent placement in a coronary artery. Dr. Coller is now resolved to find a treatment that fills the gap in care between home and hospital for heart attack victims. “We need a revolution in advancing prehospital care for people with heart attacks,” he explains. He believes that RUC-4, with help from the Harrington Discovery Institute, holds the promise of advancing that revolution.

“When you get to an obstacle, you have to choose whether to go over, around, under or through it.”