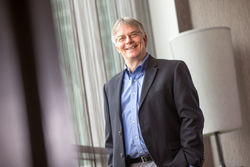 When possible symptoms of Huntington's disease (HD) appear, a blood test can tell whether a person has inherited the mutant gene. But the prognosis of the disease is so dire that many prefer not to know at all.

HD is a fatal disease that causes certain nerve cells in the brain to waste away. Symptoms usually don't appear until middle age, and may include uncontrolled movements, clumsiness, and balance problems.

Nearly a decade ago, Dr. Grabczyk found that one form of a minor DNA mismatch repair protein called MLH3 is responsible for DNA repeat expansion. His discovery was met with skepticism - 'For a while, a colleague of mine and I were the only two people who believed it!" Dr. Grabczyk says.

"With help from the Harrington Discovery Institute, we aim to inactivate this minor form of the MLH3 protein with splice-switching drugs so that it no longer causes DNA repeats to expand, while perturbing the mismatch repair system as little as possible."

“The Harrington Discovery Institute is amazing, exactly what the world needs."