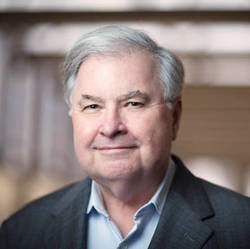 “A hotbed of new drug development.” Those are the words John C. Burnett Jr., MD, uses to describe the Harrington Discovery Institute. As a Harrington Scholar-Innovator, he plans to leverage the available resources to move his lab’s critical discovery – a peptide therapy for the treatment of congestive heart failure (CHF) – through the drug development pipeline as rapidly as possible.

Innovation is badly needed in cardiovascular medicine, particularly for treating the 5.1 million people in the United States with CHF, notes Dr. Burnett, the Marriott Family Cardiovascular Research Professor, Mayo Clinic. Outcomes are dismal, with nearly half of people with heart failure dying within five years after diagnosis. Yet, “Despite the prevalence of CHF, there has not been a new drug to treat it in 15 years,” he adds.

His proposed drug will be based on a peptide that would delay disease progression in CHF by promoting repair and regeneration of the heart. Dr. Burnett’s long-range plan is to formulate the drug so it can be given as a once-a-month injection or oral medication.

He already has three biotech startups to his credit that are advancing Mayo-engineered peptides for heart failure and drug-resistant high blood pressure. But, says Dr. Burnett, who once wanted to be a lawyer or a history teacher, this latest drug would be the culmination of a career as a cardiologist spent with “one foot firmly in the lab.”

That enthusiasm has rapidly propelled him forward with this latest discovery, which he describes as “fresh off the lab bench.” Introduced at the American Heart Association annual meeting in 2013, he believes his discovery will herald a new era of CHF treatment.

With that in mind, a sense of urgency surrounds his project. “The Harrington funding comes at a sweet time, when we can put it right to use,” Dr. Burnett notes. His plan is to “nail the molecular mechanism,” demonstrate efficacy in large animal models, then embark on preparation for clinical testing, all on as short a timeline as possible. “That’s what drives us,” he stresses. “This is the future of protein therapy. At the end of the day, our goal is to have a new drug to treat CHF.”

“Every morning, you would ask another question, and there was so much to learn that we could harness to treat patients.”