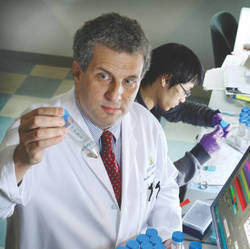 Development of a Class of Drugs to Treat Diabetes and Obesity by Lowering Bad Cholesterol and Glucose, and Generating Good Fat

Jonathan D. Powell, MD, PhD, an oncologist and associate professor of oncology at The Johns Hopkins University School of Medicine, set his sights on a career that combined medicine and research while he was still an undergraduate at Dartmouth College. “I entered Dartmouth as a pre-med student and planned to go to medical school, but participating in research as an undergraduate slightly changed my plans,” he explains.

His desire to integrate medicine with research led him to pursue a dual MD/PhD degree at Emory University instead of the MD degree he originally planned. After finishing both degrees at Emory, Dr. Powell completed a residency at The Johns Hopkins University followed by a clinical fellowship at Harvard. He then went on to a post-doctoral fellowship in immunology at the National Institutes of Health in Bethesda, Md., an experience that helped set a direction for his research that continues today with his studies of T-cell function in his lab at Johns Hopkins.

That work recently has led Dr. Powell in still another direction. He was conducting basic research into the role of T-cells in the body’s immune system using laboratory mice. During the course of these studies, Dr. Powell and his team noted that a group of mice with genetically altered immune cells became obese.

Analysis revealed that the obese mice were generating brown adipose tissue, a type of fat that plays a role in regulating body weight and metabolism, including glucose tolerance and insulin sensitivity – two important factors involved with the development of diabetes. The mice with the “brown fat” were resistant to type 2 diabetes and exhibited favorable blood levels of cholesterol and triglycerides.

The excitement of these unexpected new findings has led Dr. Powell and his team to pursue this new line of inquiry further, a temporary departure from their typical research in immunology. Dr. Powell believes that his discovery could have a significant impact on treating diabetes, obesity and heart disease.

His team already has identified a candidate gene that they believe likely promotes the creation of brown fat. “If this turns out to be the case, it might lead to the development of a completely novel approach to treating type 2 diabetes and, potentially, obesity and hyperlipidemia,” Dr. Powell says.

He sees the Harrington Discovery Institute at University Hospitals Case Medical Center as offering him a unique opportunity to rapidly develop this exciting line of inquiry. “Not only does it provide funding through the Harrington Scholar-Innovator grant to support our experiments,” he says, “it also provides the scientific and business resources to develop our findings into a drug.”

“By studying the immune system, we believe we have uncovered a potentially new approach to treating diabetes. Our finding is a nice example of how, by supporting basic research, unexpected spin-offs into translational research can emerge.”