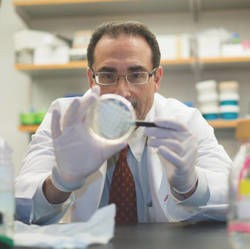 Larry S. Schlesinger, MD, professor and chair of the Department of Microbial Infection and Immunity at The Ohio State University, has devoted his career to studying some of the tiniest organisms that create the biggest impact on humans. As director of the Center for Microbial Interface Biology, Dr. Schlesinger is an internationally known expert in tuberculosis and other microorganisms that manipulate the lung’s natural defenses.

He considers infectious diseases like tuberculosis the ultimate challenge for a physician-scientist. “Infectious diseases have shaped mankind more than any other type of disease,” he explains. “Now, as the world is getting smaller, we have the problem of adaptive organisms to solve. We desperately need more innovative approaches to controlling infections.”

Dr. Schlesinger’s career path was set early in his career when he worked in a research lab while in medical school at Rutgers. “I discovered I love ‘following that thought,’ investigating why events occur,” he says. “Research is in my blood. I love discovery, it’s exciting to me.”

Later, as an internal medicine intern at the University of Michigan, he developed an interest in understanding what underlies human health and disease. His passion for research, interest in the causes of disease and a deep-seated love for people all came together during his postgraduate study at the University of California, Los Angeles. As a fellow, he delved into researching leprosy and eventually tuberculosis, developing laboratory models relevant to human health.

That was the jumping-off point for further tuberculosis research, which eventually propelled him to the University of Iowa. After 11 years at Iowa, a desire to build a larger research team, focusing on translational research, launched his decision to move to Ohio State and establish the Center for Microbial Interface Biology.

At the center, Dr. Schlesinger and his team are developing a two-pronged therapeutic approach to tuberculosis – discovering compounds that attack the TB microbe and also modulate the body’s inflammatory response to it. “I am suggesting new bifunctional targets for treating TB,” he explains.

The Harrington Discovery Institute Scholar-Innovator grant will impel his work into the next phase, providing for research in animal models, formulation of the drug delivery system and imaging to evaluate the drug’s disposition in tissues. At that point, he believes his work will be of great interest to drug companies.

The relationship that the Harrington Discovery Institute at University Hospitals Case Medical Center will foster among physician-scientists and pharmaceutical companies was one of the unique features of the grant that piqued Dr. Schlesinger’s interest in making application. “My passion is drug discovery,” he says. “We have an enormous opportunity to translate biologic pathways into therapeutics, but it requires a partnership between academic institutions and the drug companies. This is a tremendous chance to engage with investigators with an equal passion for new therapeutics and connect with industry.”

“The Harrington grant application specified they were seeking physician-scientists who are creative, passionate and interested in drug development. They wrote who I am.”