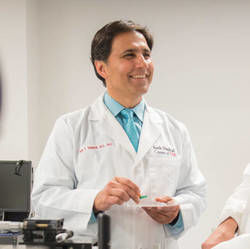 As a student at Duke University Medical School in the 1980s, Mark Humayun, MD, PhD, witnessed his grandmother’s progressive vision loss and eventual total blindness. “I was very close to my grandmother, and when she went blind, it made me rethink my career,” Dr. Humayun says. “I got interested in ophthalmology and completed my residency training at Duke Eye Center followed by a fellowship in retinal diseases at Johns Hopkins Wilmer Eye Institute.”

Fast-forward 25 years to 2013. The U.S. Food and Drug Administration (FDA) approves the Argus II. Known as a “bionic eye,” it is a bioelectronic implant that restores vision to people with retinitis pigmentosa, an inherited disease that eventually causes blindness by destroying the retina’s rods and cones, its imaging receptors. Inventor: Dr. Mark Humayun, now the Cornelius J. Pings Chair in Biomedical Sciences, Professor of Ophthalmology, Biomedical Engineering, and Cell and Neurobiology, Director, Institute for Biomedical Therapeutics, and Co-Director, USC Eye Institute, University of Southern California.

Driven to develop a device that could restore some degree of vision for the blind, Dr. Humayun’s early efforts led only to frustration. “I tried my best to solve the problem of my grandmother’s blindness with engineers, but when we sat across the table from each other it was like we spoke two different languages,” he recalls. That frustration led him to earn a doctorate in biomedical engineering so he could not only speak the same language as the engineers but also personally take on the engineering and technical design for his invention.

But even the success of his Argus II device for blindness caused by retinal degeneration like in retinitis pigmentosa did not satisfy Dr. Humayun. “Diabetic retinopathy as a cause of blindness was always in the back of my mind,” he says. “Systemic diabetes leads to small vessel disease that results in lack of oxygen to the retina, a different cause than retinitis pigmentosa.” That determination led him to invent what he refers to as “a metabolic prosthesis” for the retina, the project he will pursue as a Harrington Scholar-Innovator. The first device to receive Harrington Discovery Institute support, Dr. Humayun describes his invention as “sitting in the realm between device and drug.”

The microscopic device splits water into its component hydrogen and oxygen by electrolysis and delivers a metered amount of metabolic oxygen to the retina. By reducing the oxygen deficit in the retina, the device potentially could restore vision for people with diabetic retinopathy.

With support from the Harrington Discovery Institute and other funding, Dr. Humayun will continue refining the electrolysis for the system. So far, he says, testing results are encouraging.

Dr. Humayun and his team can leverage their work with the Argus II to help engineer most of this new device. But, Dr. Humayun notes, “Since this type of implant has never been engineered, to be successful still requires discovery.” As the device moves through its journey, closer to the preclinical testing stage, Dr. Humayun will look to the Harrington Discovery Institute experts also to assist him in building the business side of his invention.

When his newest invention ultimately gains FDA approval, it will bring Dr. Humayun the dual satisfaction of honoring his grandmother’s memory and helping millions of patients in his clinic and worldwide. Finally the circle will be completed.

“Thus far there hasn’t been anything that isn’t doable based on the laws of physics, biology and chemistry.”