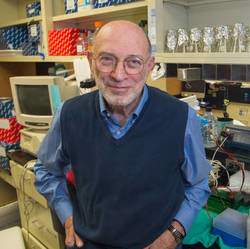 “I’m an old banjo picker,” he reveals. In addition to his talent on the five-string banjo, Dr. Cohen also is a published songwriter and plays the guitar.

But there is a connection between his public and private personas. Dr. Cohen’s love for banjo-playing and his interest in the legendary folk song writer Woody Guthrie, who died in 1967 at age 52 from Huntington’s disease, inspired his research into Huntington’s disease. Conducted in collaboration with Taiwan scientist T.H. Cheng, that research eventually led to Dr. Cohen’s selection as a Harrington Scholar.

Dr. Cohen’s pursuit of the unknown led him and University of California, San Francisco genetic engineer Herbert W. Boyer, PhD, to develop DNA cloning in 1973. Their experiments fundamentally changed the entire approach to biomedical research and laid the foundation for countless advances in medicine and pharmacology over the past 40 years.

Since then, Dr. Cohen’s continued fascination with DNA and its role in diseases like Huntington’s disease has yielded the discovery that targeting a single gene can circumvent the genetic defects that underlie a family of neurodegenerative diseases. The defect causes repeats of nucleotides, the building blocks of DNA, to expand in length. Expansion of repeats in the gene leads to production of abnormal proteins that cause brain cells to degenerate.

“That discovery led to the notion that if we could target the mechanism that enables expression of expanded repeats, we could benefit patients with the disease,” Dr. Cohen explains. “We believe we have the opportunity to treat a collection of neurodegenerative diseases, including Huntington’s, each of which is monogenetic – caused by a defect in a single gene.”

Even after more than five decades of biomedical research, Dr. Cohen finds the possibility of launching a successful treatment for Huntington’s exciting. “I would like to see this happen while I am here to enjoy it.”

“I love the process of discovery. I’m excited by research. I don’t want to be remembered for one thing but as someone who asked important scientific questions during his career.”