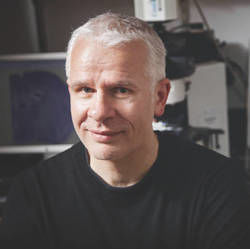 As a scientist, Wolfgang B. Liedtke, MD, PhD, associate professor and faculty of the Center for Translational Neuroscience at Duke University School of Medicine, understands pain at the molecular level. As a physician, he understands it on the human level. Recruited by Duke in 2004 based on the impact of his 2000 discovery of the TRPV4 ion channel, Dr. Liedtke was encouraged to practice neurology and pursue his own research in this specialty. He embarked on a study of pathological pain at the molecular level and within two years had organized a clinic focusing on patients suffering from trigeminal nerve pain, a chronic pain disorder.

Inspired by his patients to this day, he seeks to expand the understanding of chronic pain mechanisms at the molecular level. The ultimate goal, he explains, is to translate understanding to clinical application.

He hopes to identify specific agents that can block TRPV4’s function so that the channel in the nerve is unable to conduct ions. Blocking this critical step would interrupt the cell reprogramming and possibly the chronic pain response.

Dr. Liedtke is encouraged by published papers from other researchers that have documented various aspects of TRPV4’s function in pain. “My hope is that I will be able to add to the understanding of the pain mechanism and how the nervous system is damaged so that we can control the changes more rationally,” he says.

Having trained during his medical internship, residency and fellowship with leaders in the fields of neurology, psychiatry, neuropathology and molecular biology in Zurich, Paris and New York, Dr. Liedtke learned to dream big. Eventually he hopes to organize his clinical experience with more than 500 patients with trigeminal pain disorders into a translational research study and share the findings.

In the immediate future, the Harrington Discovery Institute Scholar-Innovator grant will help Dr. Liedtke move his research closer to Phase I clinical trials, studies in small groups of patients that evaluate a new treatment’s safety. “The grant will be an enormous boon to our efforts,” he says.

A physician-scientist who thinks in multiple directions at once, he also is considering how to harvest cells from patients and coax them in the laboratory into induced pluripotent stem cells, then nerve cells that could be used in medical applications. “The end result would be genomic personalized medicine to augment treatment of pathological pain,” he explains. “If we could develop such a system, it could teach us – amongst other things – who responds to what drugs.”

After more than two decades as a physician and researcher, Dr. Liedtke is still gripped by the power of scientific investigation. “On the canvas of insight, mostly blank, you can start painting using the scientific method,” he says. “The poor state of the human mind is the only limitation.”

“I was caught up by the suffering of people with this condition. I felt an enormous calling to make progress on their behalf.”