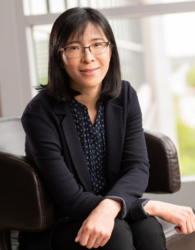 Huntington's disease (HD) is a rare, inherited and fatal neurodegenerative disease with no treatment available. Symptoms usually appear between ages 30 and 50, and worsen over the next 10 to 25 years, ultimately leading to pneumonia, heart failure or other complications. There is no therapy to slow or prevent disease progression.

Mitochondria are often referred to as "the powerhouse of the cell", and disease can occur when they are unable to completely burn food and oxygen to generate energy. As evidence suggests that mitochondrial dysfunction plays a critical role in the pathogenesis of HD, Dr. Qi and her team began work predicated on the theory that enhancing mitochondria activity could be a therapeutic option.

"We demonstrated that improving mitochondrial dynamics with peptides was helpful in stem cells and mouse models of Alzheimer's Parkinson's and HD," Dr. Qi says. "But peptides often face challenges during drug development, so we have sought small molecules able to increase mitochondrial function."

Dr. Qi and her team screened over 50,000 compounds, including CHIR99021, which has a history of useful applications in clinical biology. Her work showed that CHIR99021 enhanced mitochondria membrane potential and respiratory activity, as well as cell viability in cultured cells and diseased animals. "There is reason to hope that CHIR99021 would reduce neuronal loss, behavioral deficits and lethality in HD patients," Dr. Qi says.

With help from Harrington Discovery Institute, Dr. Qi and her team are conducting medicinal chemistry modification in further search of molecules that could become a novel therapeutic for HD, and potentially a range of neurological disorders.

“Being from an academic environment, it would be very difficult to translate our discoveries to real industry applications without help from the Harrington Discovery Institute."

Huntington’s Disease (HD) is a fatal neurological disorder caused by a trinucleotide CAG repeat expansion in the N-terminal exon 1 of the huntingtin (Htt) gene. HD manifests as uncontrolled involuntary movements accompanied by progressive motor and cognitive deficits, psychiatric disturbance, and dementia. There is no therapy to slow or prevent disease progression.Mitochondria are the “the... Continue Reading