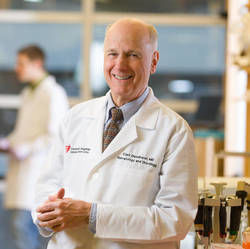 For Clark W. Distelhorst, MD, spending summers on the back porch of his childhood home translating Latin with his mother, a high school Latin teacher, is one of his favorite memories. Who can tell whether it was that early interest in Latin, the kindly, local family doctor or both that sparked his interest in medicine, but Dr. Distelhorst remembers telling his parents at a young age of his desire to be a doctor.

That early certainty eventually took him to medical school at The Ohio State University College of Medicine where he discovered a world beyond the family doctor’s sphere. “In medical school, I learned there are so many diseases we don’t have treatments for,” he recalls. That realization resonated with him, shaping his decision to specialize in hematology and, ultimately, his career as a physician-scientist.

His clinical practice as a hematologist at University Hospitals Case Medical Center and his laboratory research have a natural synergy. “I am very interested in taking care of patients and in understanding the disease they have,” he explains.

As a hematologist, leukemia and lymphoma are his major clinical and research interests because of the need to develop new treatments, particularly for acute myeloid leukemia (AML) with its high mortality rate. Treatment and outcomes for AML have not changed significantly in the past 30 years, a fact that Dr. Distelhorst takes as practically a personal challenge as a physician and a scientist. He has devoted more than 30 years to understanding how to develop novel treatments for these malignancies.

The team discovered Bcl-2’s second mechanism – which holds the promise of being a major treatment target for certain cancers – almost by accident while they were studying corticosteroids, Dr. Distelhorst notes, adding, “Science isn’t always programmed. To make discoveries, you have to keep your eyes and ears open to new ideas.”

With the Harrington Discovery Institute’s support through the Innovation Support Center, Dr. Distelhorst hopes to improve the compounds and develop them into drugs that can be tested in preclinical models. Ultimately, he looks ahead to the day when one of the team’s compounds is in clinical trials with leukemia and lymphoma patients, especially AML patients.

At the end of the day, Dr. Distelhorst says two things are most important to him: believing that he tried to do his best for every patient he encountered and seeing that his research has some degree of importance and was well and honestly done.

For now, he is impatient but persistent – impatient in that he wants a drug for patients that works but persistent in doing the painstaking, meticulous work it takes to be successful. “Science takes time. It’s not a source of instant gratification,” he says. “We want to make sure we get it right.”

“To make discoveries, you have to keep your eyes and ears open to new ideas.”