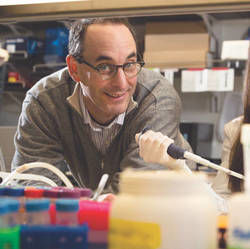 Alzheimer’s disease, with its slow descent into mental, emotional and psychological oblivion, is perhaps one of the most feared diseases of the 21st century. To Marc I. Diamond, MD, a neurologist and the David Clayson Professor of Neurology at Washington University School of Medicine, it’s also one of the most fertile areas for translational research.

Dr. Diamond’s inspiration derives not only from his patients but also from his father, Ivan Diamond, MD, PhD, researcher and founding director of the Ernest Gallo Clinic and Research Center at the University of California, San Francisco. “My dad impressed upon me the excitement and joy of life as an academic physician, and the worthiness of the work,” he says.

Since joining the Department of Neurology at Washington University in 2009, Dr. Diamond has concentrated his research on neurodegenerative diseases. His laboratory was responsible for a major breakthrough in understanding the development of neurodegenerative diseases like Alzheimer’s with the discovery that pathologic proteins in these diseases propagate pathology between cells, just like prion protein.

Building on that discovery, he now is exploring the development of antibodies that can target these pathologic proteins and block their spread through the brain. “If this approach is successful, it could be a game-changer in Alzheimer’s treatment,” he says. ”Anything that would significantly slow down the disease, let alone cure it, would have enormous impact on our society.”

Always considering the practical clinical application of his discoveries, Dr. Diamond sees the need for a screening tool that could detect these protein pathogens before they have a chance to cause any harm to the brain. So far, he has discovered a way to detect the pathogens in spinal fluid and blood prior to the onset of dementia.

“It’s early in the discovery process, but I am very excited by the potential implications of this work, although the corollary is that once we can detect the disease at a preclinical stage, we need to have a therapeutic intervention available,” he says.

Dr. Diamond’s next steps will be developing antibodies that are more effective at interfering with the pathologic process and refining the screening technique. Support from the Harrington Discovery Institute will give him the flexibility to explore different approaches, he says. “It is helping me go in directions that promise to be the most productive – and the most exciting.”

“Diseases like Alzheimer’s… are devastating for those they affect, not only the person with the disease but also their loved ones, who watch their steady decline.”