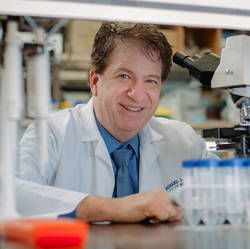 A Novel Drug Class to Treat Obesity and Diabetes

Richard J. Johnson, MD, the Tomas Berl Professor of Medicine, and Chief of the Division of Renal Diseases and Hypertension at the University of Colorado Denver, Health Sciences has been dubbed the “sugar researcher” in the media, interviewed by popular health and nutrition writers and radio hosts, featured on websites and published two books available on Amazon.com. Considered controversial, compelling and creative among the scientific community, there’s no doubt that Dr. Johnson’s research on sugar and obesity has captured the attention of even the nonscientist public.

His body of work presents convincing evidence that obesity is triggered by a “switch” in our metabolism that makes us want to eat more and exercise less. “Our work focuses on how diet (and in particular fructose) may have a role in the epidemics of obesity, diabetes, hypertension and kidney disease, and how those sugars may cause their metabolic effects by raising uric acid levels,” Dr. Johnson explains.

He hypothesizes that fructose metabolism turns on what he calls “the fat switch” by raising uric acid levels, which in turn cause oxidative stress inside cells in the energy factories known as mitochondria. As a result, the cells’ ability to metabolize fat is blocked and cellular energy output is reduced. The energy deficit causes cells to signal the brain to eat more. The person eats more and starts packing on the pounds.

“We have very powerful data from animals that demonstrate that fructose increases food intake while reducing the metabolic rate,” Dr. Johnson explains. The result is what he terms “a perfect storm for how fructose may cause obesity, insulin resistance, kidney damage and fatty liver.”

His portrayal of fructose as the criminal in obesity is admittedly controversial. But skepticism doesn’t faze Dr. Johnson, who holds that his scientific evidence, anthropology, evolution, comparative physiology, biology, molecular biology and history all support his conclusions. “The data are the data,” he says.

Unfortunately, the obesity solution is not as simple as reducing added sugars (table sugar and high fructose corn syrup that are the main sources of dietary fructose) since the body also can make fructose. The key, Dr. Johnson believes, is inhibiting the fructose metabolic pathway.

He and his team are trying to build such an inhibitor that is safe and effective in humans, leading, they hope, to development of the first drug to block sugar’s metabolic effects. A self-described workaholic, Dr. Johnson says he already has compounds that work in the test tube. The next step is to identify the optimal one and refine it into a marketable drug. “I hope to work with some topgun scientists with the Harrington Discovery Institute to get there,” he says optimistically.

Despite his confidence, Dr. Johnson admits, “It’s not a slam-dunk. But,” he adds, “if we can pull this off, the day is coming when we will be able to reverse the current epidemics of obesity and diabetes.”

“If we can pull this off, the day is coming when we will be able to reverse the current epidemics of obesity and diabetes.”