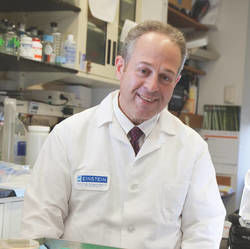 Ask Richard N. Kitsis, MD, professor and director of the Wilf Family Cardiovascular Research Institute at Albert Einstein College of Medicine, about the challenges and pitfalls he expects to encounter with his research on a new heart drug, and his answer is unexpected. “I think about the challenges,” he says, “but I’m an optimist, so my approach is more ‘Damn the torpedoes, full steam ahead!’” Taking Aggressive Action That no-holds-barred approach to scientific investigation has led to his discovery of a specific molecular compound that inhibits the death of heart muscle.

Translated into a drug that could be given to patients having a heart attack, it has the potential, Dr. Kitsis believes, to limit the amount of dead heart tissue caused by the attack. This is critical, he explains, because a nonfatal heart attack that causes extensive damage to the heart muscle typically leads to congestive heart failure. Limit the damage, he says, and the incidence of congestive heart failure drops.

End result – a healthier population and lower medical costs. Dr. Kitsis’ passion for helping people with heart attack has its roots in his personal life. “My father had a heart attack when I was 13. That made a big impression on me, although I probably didn’t realize it at that time,” he recalls. Ten years later, as a resident at Massachusetts General Hospital and the Boston VA Medical Center, he discovered that he was fascinated by cardiovascular medicine. His interest in the clinical side of heart disease continued during his fellowship in cardiology at Albert Einstein College of Medicine.

He was appointed to the faculty in 1991, specializing in cardiovascular medicine, and was named Chief of Cardiology in 2005. In recent years, Dr. Kitsis has given up his clinical leadership role to direct the newly endowed Wilf Family Cardiovascular Research Institute and focus on his research. Now, he believes, his work on the molecular mechanisms of cell death and their roles in heart disease is at a critical juncture.

“We now know that cell death during a heart attack is regulated,” he explains. “We have identified a compound that we know inhibits heart muscle death. With the Harrington Discovery Institute Scholar-Innovator grant, we can determine its molecular target in the cell and how it interacts with that target.”

From there, the next steps will be to modify that compound to improve its effectiveness and, eventually, move it into the drug development pipeline. At that stage, his discovery shifts from academia to the business arena, requiring the resources of a drug company to bring it to market. The opportunities offered by the Harrington Discovery Institute at University Hospitals Case Medical Center to develop relationships with drug companies that share his vision was one of the reasons he applied for a Harrington Scholar-Innovator grant, Dr. Kitsis shares.

“There are a series of little ‘eureka’ moments along the way. You can’t build a wall in one step, but every time you put a brick in the wall – those little eurekas – it’s exciting.”