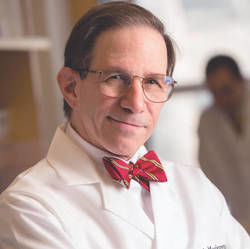 Discovery of a Compound that Increases Natural Protective Substances in Tissues to Help with Liver Regeneration and Other Human Diseases, Including Pulmonary Hypertension and Cancer

For Sanford D. Markowitz, MD, PhD, an oncologist at University Hospitals Seidman Cancer Center and the Markowitz-Ingalls Professor of Cancer Genetics at Case Western Reserve University School of Medicine, cancer research has a personal dimension. Early in his medical career, his father developed colon cancer, inspiring in Dr. Markowitz a desire to fight back against this disease.

“Anyone who has experienced the acute terror of having cancer strike a family member, who has dreaded that every ache, pain or ailment was the beginning of the end, understands this desire to do something to make a difference,” he says. Now, years after his father’s illness, the patients he treats in his oncology practice provide a continuing source of motivation. “I’ve seen patient after patient, and I wanted to be able to help but lacked the means to do so,” he adds.

Dr. Markowitz, who heads the cancer genetics program in the Case Comprehensive Cancer Center at Case Western Reserve University, is dedicated to understanding the genetic basis for colon cancer as the key to developing better treatments. He and his team have identified a genetic “switch” that controls cell division and tissue growth in colon cancer. Theoretically, turning off this genetic switch should prevent a tumor from growing. Turning it on potentially would promote tissue growth, a situation that could be useful in promoting new tissue growth following organ transplant.

With the Harrington Discovery Institute Scholar-Innovator grant, Dr. Markowitz plans to continue testing the compound in animal models, ultimately hoping it will have application in the treatment of colitis and inflammatory bowel disease as well as liver and bone marrow transplantation. To conduct this next stage of research, Dr. Markowitz first will develop an analog of the compound that has a longer half-life so that therapeutic blood levels can be maintained longer.

As exciting as he finds the basic research process, Dr. Markowitz is keenly aware of the need to translate scientific discoveries into commercially viable treatments – and the barriers to making that happen. “The biggest challenge for any academic laboratory is to get beyond the lab and develop a therapy,” he explains.

“You need collaborators, pharmaceutical companies, biotechnology companies that can produce compounds according to FDA safety standards. In general, academicians do not have access to those kinds of organizations.”

The Harrington Discovery Institute at University Hospitals Case Medical Center, with its two advisory boards and relationships with the pharmaceutical industry and venture investors, does have that access. “The contact with experts who can help ensure that a new treatment is deliverable, stable and meets federal safety standards can make a critical difference in whether a new drug is successful,” Dr. Markowitz says.

“By connecting academics with industry experts, the Harrington Discovery Institute is giving our ideas a fighting chance to succeed.”

If you could write a medical wish-list of futuristic technologies, regenerating tissue would be pretty high up there. It could do things like treat a variety of inflammatory conditions and even help cancer patients regrow healthy cells.A new Seattle-based biotech startup, Rodeo Therapeutics, is hoping its technology can make tissue regeneration a reality, and it has just raised a $5.9 million... Continue Reading