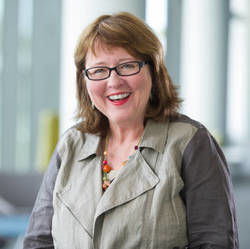 Carol Colton, PhD, receives dozens of emails and letters, burdened with tears, saturated with hope for a cure, for better treatments, for a lifeline of any kind. They come from family members of people with Alzheimer’s disease, reaching out to Dr. Colton for some glimmer of light in the darkness of this terrible disease.

They have heard that Dr. Colton, Professor of Neurology at Duke University School of Medicine, is blazing a new path in Alzheimer’s disease research, a path that may lead to an innovative treatment approach. Dr. Colton’s research focuses on the body’s immune response to Alzheimer’s disease. “Evidence supports the idea that the immune system, which protects our bodies from foreign invaders, plays a part in contributing to the disease,” Dr. Colton explains.

Microglia, a type of immune cell that moves rapidly to the site of injury in the brain to help it provide, repair and survive, are the first responders to infection. Research conducted at Duke shows that microglia begin to divide and change early in Alzheimer’s disease. Instead of fighting off invaders and protecting the brain, the immune mechanism somehow goes haywire in the brain.

Dr. Colton and her research team determined that microglia in Alzheimer’s disease chew up an important amino acid, arginine. Arginine deprivation appears to be related to Alzheimer’s disease. “When we blocked this process with a small-molecule drug, we prevented memory loss and structural changes in the brain in laboratory mice that carried familial Alzheimer’s,” Dr. Colton explains.

The laboratory trial that yielded such dramatic results was complex and lengthy, but set the course for her future research, she says. Her ultimate goal is to block the process at the onset point and prevent Alzheimer’s in susceptible patients or prevent its progression in patients with early-stage disease. With Harrington Discovery Institute’s assistance, her drug is moving rapidly toward the possibility of a clinical trial, more quickly, she says, than she would have believed possible.

Neurodegenerative diseases like Alzheimer’s are very complex, she notes. “I feel like I have been doing a giant puzzle, and I keep trying to fit the pieces together.” In the face of that complex puzzle, the emails and letters from families will not allow her to get discouraged or give up, she adds.

“The emotional and physical suffering from Alzheimer’s is immense, and people are terrified of it,” Dr. Colton says. “I truly believe we can successfully fight this disease.”