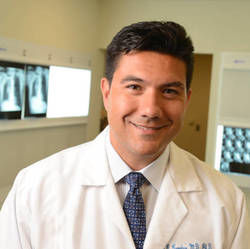 When Darren Carpizo, MD, PhD, an Assistant Professor of Surgery and Surgical Oncology at Rutgers’ Robert Wood Johnson Medical School, first considered a career in medicine, he didn’t give much thought to becoming a researcher. “I went into medicine because I wanted to take care of sick people,” he says. Looking back, he can see that his decision to be a doctor was the first step along a path that would lead him into the world of cancer drug development. A biology major in college, he was “intellectually curious” about the cancer process.

His path became clearer during medical school at the University of Illinois at Chicago. There he entered a program for medical students interested in research, initially as a means of paying his tuition, but soon discovering that he loved the work. “I caught the research bug,” he says. “I discovered I really liked it and decided to pursue a career as a physician-scientist.”

From there, he elected to serve his surgical residency at the University of California, Los Angeles (UCLA), in part because of the program’s track record for training physician-scientists. From the beginning, he was interested in pursuing a career as a surgical oncologist. “My interest gravitated toward diseases with the most negative impact because that’s where doctors are really needed,” Dr. Carpizo explains. “I felt it would be most rewarding to interact with patients whose cancers were diagnosed rather early and in whom surgery would have a possibility of cure.”

Dr. Carpizo understood early on that to be successful in research, formalized training in the discipline is necessary. This led him to UCLA’s Specialty Training in Advanced Research (STAR) program. Through STAR, he completed a PhD in Molecular, Cell and Developmental Biology.

While completing a fellowship in surgical oncology at Memorial Sloan-Kettering Cancer Institute, Dr. Carpizo developed an interest in liver, pancreatic and bile duct cancers, appreciating the complexity of the operations. Also during this time, he decided that his research career would focus on drug development. “The biggest problem that we face in managing patients with these types of cancer is recurrence, and recurrence requires drug treatment,” he notes. “Unfortunately, the drugs we have available for these cancers are largely ineffective.”

Now at Rutgers Cancer Institute of New Jersey, he divides his time between operating on patients with liver, bile duct or pancreatic cancer and laboratory research focused on developing new cancer therapeutics. The research that earned Dr. Carpizo recognition as a Harrington Scholar-Innovator focuses on mutation of the p53 gene, the most frequently mutated gene in human cancer. A p53 mutation disables the gene’s normal mechanism for preventing cancer cells from multiplying.

“From over 30 years of research on p53, we know that it is one of the most important genes in cancer biology, yet we still do not have a drug available that targets p53, although some are now in clinical trials,” he says.

He and his team have discovered one of the first drugs that targets mutant p53. Their drug makes the mutant p53 protein normal again, so it can do what it is supposed to do – kill cancer cells.

He looks to the Harrington Discovery Institute for guidance in moving his team’s most promising compound along the pathway to trials in humans.

“The compounds we are testing against p53 are consistent with the current trend to find drugs that act on tumors with specific mutations,” he explains. “This is the essence of personalized medicine.”