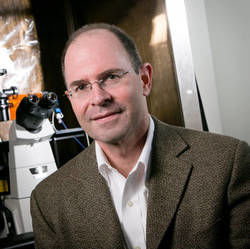 Geoffrey S. Pitt, MD, PhD, Professor of Medicine, Duke University, is privileged to live that wisdom every day. “I love discovery. That’s what takes me to work in the morning,” he explains.

The pursuit of discovery brought Dr. Pitt to Duke and its nationally renowned Division of Cardiology in 2007 and likewise to his induction into the prestigious American Society for Clinical Investigation the same year. As Director of the interdepartmental, multidisciplinary Ion Channel Research Unit at Duke, Dr. Pitt explores the role of ion channels in heart disease and many other disease systems.

“At Duke, the multidisciplinary approach of the Ion Research Channel Unit leads to cross-pollination,” Dr. Pitt explains. “By working together with other investigators studying development and calcium signaling, we’re starting to understand fundamental and unexpected roles for calcium channels in a number of different organs.”

As a cardiologist, Dr. Pitt continually seeks connections between patients and his lab research with the goal of translating his research into patient treatments. When he read a report that a number of patients with arrhythmia (heart rhythm disorder) caused by a cardiac calcium channel disorder also had syndactyly, a fusion of their fingers, it triggered his scientific imagination. “I began to wonder how that calcium channel disorder in the heart affects limb development,” Dr. Pitt says.

That led Dr. Pitt to speculate on the possibility of a therapeutic application in osteoporosis, the brittle bone disease. Based on this research, Dr. Pitt identified certain calcium channels as a target for a new drug. With a number of drugs targeting calcium channels already available, “Our initial strategy is to tweak existing drugs to target the desired calcium channels in bone,” he explains.

From there, he hopes to synthesize and test new compounds with support from the Harrington Discovery Institute and the Innovation Support Center and, ultimately, design a new drug to treat osteoporosis, a disease that affects some 50 million Americans. Dr. Pitt views his relationship with the Harrington Discovery Institute as a “wonderful opportunity” to move discovery from the lab bench to the clinic and make a lasting difference in the everyday lives of possibly millions of people.

“Discovery is what takes me to work in the morning.”