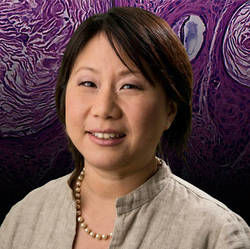 In the world of medical scientific research, much of the work is slow and painstaking, often unrewarding on a day-by-day basis. But the moment when an experiment works, a hypothesis is validated or the results are positive – that eureka moment – is the payoff for months and years of diligent application of the scientific method. For Harrington Scholar-Innovator Jean Tang, MD, PhD, Associate Professor of Dermatology at Stanford University Medical Center, the eureka moment occurred when patients with skin cancer who she had treated with a new drug returned cancer-free in less than two months. “For the patients, it changes their lives,” she says. “There is no better motivation for me.”

As a dermatologist in sunny California, Dr. Tang sees many patients with basal cell carcinoma, a skin cancer that historically has been treated by radiation or surgery to remove the tumors. In 2012, the US Food and Drug Administration (FDA) approved vismodegib (Erivedge) to treat inoperable basal cell carcinomas. Developed by pharmaceutical giant Genentech, “vismo” is the first class of drugs approved by the FDA that works by inhibiting the hedgehog molecular signaling pathway, a key regulator in human development before birth and a major contributor to cancer in adults when it goes awry.

Vismo is a valuable treatment but cannot be used by many of Dr. Tang’s patients who are unable to take medications or can’t tolerate the side effects from taking it orally. Those patients and their issues motivated Dr. Tang, who participated in vismo’s clinical trials in 2007, to pursue a topical inhibitor of the hedgehog pathway using another drug, itraconazole.

Although she respects Genentech’s 20 years of painstaking research to create vismo, Dr. Tang is on a different path. “I am not a patient person,” she says. “I prefer science at a later stage, when the impact on humans is known.” Her PhD in DNA repair and cancer biology plus postdoctoral training in clinical trial design help her move scientific findings through basic science and into clinical trials more quickly, she says.

As a physician-scientist, she says that her greatest fear would be to make a significant discovery that could benefit patients but lack the commercial experience and knowledge to be able to move it ahead.

With the Harrington Discovery Institute’s support, she will work to develop an itraconazole cream that is effective without the risks and side effects associated with an oral drug. The oral form already has proven the efficacy of the medication’s main ingredient in treating basal cell carcinoma, and Dr. Tang hopes to see the results of her research on the topical form in a relatively short time.

Her dramatic experience with basal cell carcinoma patients and vismo has set the stage for positive expectations. “We gave them the drug and the cancer went away because the drug shut down the [molecular] pathway,” she says. “It doesn’t get any better than that.”

“You have to be humble and know when you need help. I personally don’t have the experience in developing a drug product and a company that the Harrington experts will provide.”