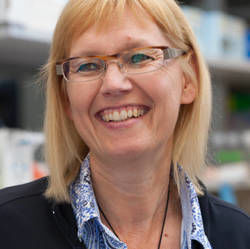 A distinguished researcher, instructor and physician in the United States and her native country of Finland with a host of impressive degrees and titles, Marikki Laiho, MD, PhD, Professor of Radiation Oncology and Oncology in the Sidney Kimmel Comprehensive Cancer Center at The Johns Hopkins University, is remarkably approachable and down to earth. Possibly it’s having three children in the teen – young adult age range (ages 15, 17 and 20) or the close family ties across three generations of family in the United States and Finland that keep her grounded.

The project that earned Dr. Laiho a Harrington Discovery Institute Scholar-Innovator award began with her research on p53, a protein that protects cells from DNA damage. If a cell loses the function of p53, it loses its safeguards against genetic damage and tumor growth is uncontrolled. Her original search was to find a small chemical molecule that could reactivate the p53 pathway. “When we realized our molecule went beyond that and could kill cancer cells independent of p53, that was a watershed,” she says.

As a Harrington Scholar-Innovator, Dr. Laiho plans to tap into the Innovation Support Center Advisory Panel’s expertise in early-stage drug development to define the next steps for her project. At this stage, she is tentatively targeting her drug toward advanced prostate cancer, one of her longtime clinical interests. Although Dr. Laiho’s days now are devoted primarily to research, she is thankful for her clinical background. The realities of treating patients is another facet to her life that, like her family, keeps her grounded. “It helps me ask questions from the disease side that bridge between the basic science and the patient,” she notes.

Dr. Laiho’s medical interest veered toward cancer early in her career, while still in medical school, as the fledgling understanding of cancer and genetics was unfolding. Now she finds herself at the threshold of not only a new phase in her career as she participates in drug development for the first time but also a new era in cancer treatment. “Our discovery is fundamental because the RNA polymerase I pathway has not received any attention as a therapeutic target,” she says. Proceeding down an unproven path is risky, Dr. Laiho adds, but quitting is not an option.

“There are few times in your life when you realize that you have to lead the field and see what happens. We must go ahead.”

“As a scientist, I ask what is the biologic reason? When the answer was I don’t know, that’s what drove me to research.”