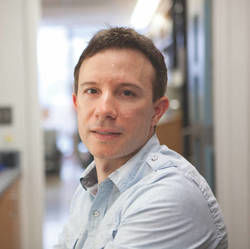 Scott A. Oakes, MD, and Feroz R. Papa, MD, PhD, associate professors at the University of California, San Francisco (UCSF), prove the truth of the old adage “Two heads are better than one.” Coming from two different perspectives and trainings – Dr. Oakes is a pathologist in the UCSF Diller Family Comprehensive Cancer Center; Dr. Papa is an endocrinologist within the UCSF Diabetes Center – the two put their heads together to discover new details about the causes and mechanisms of cell death.

Dr. Oakes’ research focuses on the mechanism for cell death in response to cell injury. Dr. Papa is studying how the cell detects stress and transmits those signals to the cellular death-promoting machinery. Eventually, they hope these two vantage points will converge on a new understanding of diseases that are caused by cell degeneration under unchecked cell stress, such as diabetes, Alzheimer’s disease, Parkinson’s disease and Lou Gehrig’s disease.

“Our work and passions brought us together, and Scott and I developed a collegial relationship that provides a sense of fulfillment and gratification that adds to the work that we do,” Dr. Papa says. The two researchers share resources, research teams and responsibilities. “That spirit of camaraderie, that working relationship has trickled down to the people that work for us,” he adds.

Drs. Oakes and Papa have been working together since 2007 and are making progress at “saving cells” that they believe has significant potential for translation into clinical care. They have identified IRE1, a protein that plays a critical role in many biological processes, as a regulator of cell fate. IRE1 is a cellular stress sensor that normally protects cells from death when stress levels are low and manageable. But, under prolonged conditions of high cellular stress, it can activate a series of biologic events that actually causes cell death instead.

Through collaboration with chemist Dustin Maly, PhD, an associate professor at the University of Washington, the researchers have identified several IRE1 inhibitors that can tilt the cellular balance toward survival under stress conditions. “We expect that these compounds will be powerful tools to investigate connections between cell stress and cell death,” Dr. Papa explains. “We currently are advancing these compounds through medicinal chemistry to make them more drug-like and useful for animal and preclinical studies.”

Their long-term goal is to develop new drugs that reduce cell stress and cell death to treat many cell-stress-related degenerative diseases. Their target list includes the neurodegenerative diseases and other diseases of cell loss such as type 2 diabetes, as well as certain types of cancer in which cells fail to die appropriately in response to stress. With the basic science behind their therapeutic vision steadily gaining traction, Drs. Oakes and Papa are positioned to take advantage of the resources that the Harrington Discovery Institute at University Hospitals Case Medical Center can offer for moving their discoveries from bench to bedside.

“We were working on the same problem from two different ends – Feroz was studying one end of the problem of cell death, and I was studying the other end.”