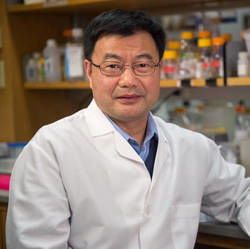 A Drug that Regenerates Pancreas Cells to Treat Diabetes

When Xianxin Hua, MD, PhD, a professor at the Perelman School of Medicine, University of Pennsylvania, isn’t in his lab, he’s likely to be found casting his line in a peaceful river or a lake. Something of a philosopher besides being a physician-scientist and a fisherman, he draws a parallel between science and fishing. “Like in fishing, with science it takes a long time to discover something,” he explains.

He keeps that in mind as he looks back on the path that has brought him to a Harrington Scholar-Innovator award. It was 2006 when he and his team were studying the tumor suppressor effects of a specific gene. To their surprise, in addition to the gene’s role in regulating the growth of endocrine cells, they found that acutely deleting the gene resulted in the rapid proliferation of beta cells, the specialized cells in the pancreas that manufacture insulin. In people with diabetes, beta cells are damaged or not functioning normally, leading to the abnormal blood sugar levels that characterize the disease.

“I vividly remember reviewing the data that morning with a student,” Dr. Hua recalls. “That was the moment it dawned on us that wow, this is a direct effect.”

For the first time, Dr. Hua’s lab had provided scientists with evidence of the direct relationship between this gene and type 2 diabetes. When their findings were published and communicated in the American Society of Molecular Biology, it was hailed as a groundbreaking discovery.

The team has continued studying the role of a protein called menin, which is encoded in the gene they deleted in the beta cells, and how it regulates the expression of genes that control a beta cell’s capability to regenerate. “This is science on the cutting edge of research, and it has led us to discovering a potential new drug,” Dr. Hua says.

Like a fisherman eager to try an untried fishing spot, Dr. Hua believes it is important as a physician-scientist to stay open to the unexpected discovery. “I follow my passion to see where it leads and whatever difference it might make,” he explains. “A discovery that would improve people’s lives has always been my dream.”

So far the team’s exploration has led to development of a small molecule inhibitor that may restore normal blood sugar levels in laboratory animals with high blood sugar or diabetes.

If the research continues to unfold as it has so far, “it would be a radical leap forward in the treatment of diabetes,” Dr. Hua says. “A small molecule drug could be used to treat diabetes by tapping into the diabetic patient’s own ability to regenerate beta cells.”

His hope is to use the Harrington Discovery Institute resources to develop a better, more powerful molecule that can eventually be advanced to clinical trials. He knows that reaching that goal is still years in the future. Fortunately, patience is a quality he has cultivated during quiet hours with his rod and reel along the water’s edge.

“This is science on the cutting edge of research, and it has led us to discovering a potential new drug.”