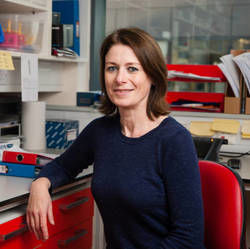 Oxford-Harrington Scholar Alison Simmons, MD, PhD, has turned her frustration with the limits of modern medicine into hope for hundreds of thousands of patients with Crohn’s disease. In her 15 years as a gastroenterologist at Oxford’s John Radcliffe Hospital in the UK, Dr. Simmons personally has cared for hundreds of patients with Crohn’s, a chronic inflammatory disease of the large intestine. Crohn’s disease has no known cure, leaving Dr. Simmons with no options other than treating patients for flare-ups and offering them guidance on keeping symptoms in check.

Frustrating, yes, but for Dr. Simmons, the experience also has been inspiring.

“It’s very important to have a vibrant clinical department,” she explains. “That’s what keeps you in touch with where the translational research is needed.” Gifted with an inquiring mind and a love of science and research, Dr. Simmons felt drawn to the problem of Crohn’s disease as an opportunity to make a difference.

Her first experience in research at Oxford sealed her future. “I got hooked on research,” says Dr. Simmons who is also Professor of Gastroenterology at the University of Oxford. In-depth studies related to liver disease and HIV convinced her that her destiny lay in immunology – the study of the body’s defense system against viruses, bacteria or parasites.

That fascination, combined with her clinical training as a gastroenterologist, led her to the Crohn’s disease research that resulted in her selection as the first Oxford-Harrington Scholar. Dr. Simmons’ research focuses on the genetic risk factors for Crohn’s disease; as many as 20 percent of people with Crohn’s have a parent, child or sibling with the disease. New understanding about the genetics underlying the disease has the potential to impact thousands of people, she explains. In the UK, an estimated 115,000 people have Crohn’s disease; in the United States, it is estimated at 700,000.

Dr. Simmons and her team have teased out the NOD2 gene as the strongest genetic link to Crohn’s disease. Normally, NOD2 defends the gut from pathogens by forming a shell around bacteria and degrading it.

“In Crohn’s patients, a genetic defect prevents NOD2 from operating normally. The coating doesn’t form, so the bacteria can hang around and multiply and cause damage,” she explains. She hopes to discover a drug that will overcome the genetic defect to turn NOD2 back on and restore its normal function.

Although that approach seems very promising, the team is tackling the problem in the lab from the inflammation angle as well. “We have a number of paths to explore, and what will result in a treatment, we don’t know,” Dr. Simmons adds. Best-case scenario, she says, would be in five years to have multiple treatment options available for Crohn’s patients. With the support of the Harrington Discovery Institute, Dr. Simmons hopes to be responsible for at least one of them.

“I was very keen on being a doctor early on in my life. I knew I wanted to do something where I could challenge myself and make a lasting difference.”