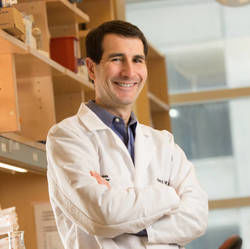 Development of a Novel Therapeutic to Treat Acute Myeloid Leukemia

Cancer researchers, even the most distinguished ones such as Harrington Scholar-Innovator David Wald, MD, PhD, pathologist and Assistant Professor at Case Western Reserve University School of Medicine, are used to disappointment. Day after day, week after week, year after year, they pursue the discovery that may lead to a new cancer treatment. Or not.

“I usually have multiple projects going on, knowing that most won’t work – but one could,” Dr. Wald says. It’s that single possibility that motivates him – the potential to help millions of people by making an impact on a devastating disease.

That’s why the reaction of a Harrington Discovery Institute Innovation Support Center chemist to one of Dr. Wald’s projects made an impression. “That interaction got me excited because he was excited,” Dr. Wald says. “It made me think that we are on to something.”

The chemist was reviewing Dr. Wald’s research on securinine, an organic nitrogen-containing compound found in plants. Considered one of the 50 fundamental herbs used in Chinese herbal medicine, securinine has been used in China and Russia to treat neurological conditions such as amyotrophic lateral sclerosis, poliomyelitis and multiple sclerosis.

Dr. Wald and his team are working to modify securinine to make it effective against acute myeloid leukemia (AML) and colon cancer. It has never been tested as an anticancer agent, but Dr. Wald was intrigued by reports demonstrating that securinine causes cell death in leukemias with a specific genetic mutation and may be active against infections. The same genetic mutation as AML appears in colon cancer, leading Dr. Wald and his team to pursue a parallel path for their modified securinine, testing it as treatment for both diseases.

Dr. Wald remembers being interested in AML while still a medical student at Case Western Reserve University School of Medicine. “I realized even then that there was a need for new cancer drugs,” he recalls, and he began considering a career in research.

That interest solidified during his residency in clinical pathology at UH Case Medical Center and his postdoctoral research. By then, his career path was set. “I am very research oriented,” he says. “I discovered that pathology and drug discovery research match with my interest in being hands-on in the lab.”

His cancer drug research already has attracted the attention of the Ohio Cancer Research Alliance, leading to a $60,000, two-year seed-money grant in 2011. That grant enabled Dr. Wald and his team to secure an additional $2.62 million in research funding, including $1.9 million from the National Institutes of Health and $720,000 from the American Cancer Society.

“My research has been well-received by funding agencies,” Dr. Wald says. “I think it is because they can see the direct translational effects of it as a potential cancer treatment.” The Harrington Discovery Institute grant with its connections to drug development experts, he says, will provide the industry expertise he needs to move his discovery ahead.

He already has conducted a small Phase I clinical trial with AML patients. “That has been the most satisfying, to see the trial of a potential new treatment come out of my lab work,” he says.