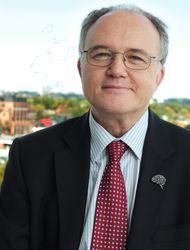 For the past two decades, most work aimed at developing a curative therapeutic for Alzheimer's disease (AD) has been focused on the clumping of beta-amyloid and tau proteins. Dr. Weaver is using a fundamentally different approach based on ample data indicating that AD may also be caused by inflammation of the brain.

IDO is a known target which has been studied for non-neurological disorders; FBP is a previously un-described receptor. To target FBP Dr. Weaver's team is using furosemide – a remarkably novel approach, since for over 60 years furosemide has been used exclusively as a diuretic. Their hypothesis is that inhibiting these receptors will down-regulate the release of inflammatory cytokines.

Harrington Discovery Institute is supporting Dr. Weaver in his work to develop molecules targeting both these receptors. “We hope that our work leads to a drug that is part of the cure, complementary to other approaches,” Dr. Weaver says. “When you consider that there are many medications for a condition as simple as high blood pressure, it becomes obvious that for AD, a complex disease in the most complex part of the body, one day there will be not one, but numerous therapeutic answers.”

"Working with our Harrington team, there have been more than one 'why didn't I think of that?' moments."