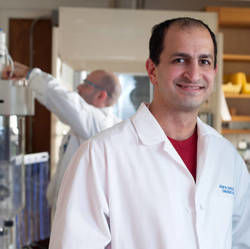 Development of an Injectable Form of Oxygen to Prevent Life-Threatening Hypoxemia in Medical Emergencies, such as Cardiac Arrest

As a pediatric intensive care specialist at Boston Children’s Hospital, John Kheir, MD, treats infants and children every day who have every type of extreme need, “but oxygen deprivation is the most poignant,” he says. “Without oxygen, cells cannot produce the energy they need to perform their functions, so even brief periods of oxygen deprivation are very poorly tolerated.”

He was first inspired to find a solution for the problem by a little girl who sustained a severe brain injury caused by pneumonia that resulted in severely low oxygen levels. The child died from oxygen deprivation, even as the medical team connected her to a heart-lung machine.

“That experience reinforced to me the need for a clinical application that could quickly deliver oxygen in an emergency,” Dr. Kheir explains. He began thinking through the clinical issues that would be involved in delivering oxygen to the bloodstream through an intravenous line in a form that the body could easily use.

Since 2006, he has been on a mission to translate those ideas into a viable product. The result is injectable oxygen, the project that he now will continue as a Harrington Scholar-Innovator. He is working on development of a microparticle made of fatty molecules surrounding oxygen gas with the particles suspended in a liquid.

Stored in a preloaded syringe, oxygen can be delivered almost instantaneously through an intravenous line. Dr. Kheir envisions the syringes being stored on every code cart in a hospital, ambulance or transport helicopter to help stabilize patients who are having difficulty breathing until a clinician can safely insert a breathing tube or perform some other lifesaving therapy.

In some of his earliest experiments, Dr. Kheir and his team members knew they were onto something when they drew their own blood, mixed it in a test tube with the microparticles, and watched blue blood turn immediately red. They then demonstrated that an infusion of these microparticles could keep an animal alive for 15 minutes without a single breath. With that proof of concept, the team has been working with chemical engineers, particle scientists and other clinicians to identify the optimal microparticle that will make the safest, most effective drug.

With the help of the Harrington team, Dr. Kheir hopes to fast-track his discovery. “I hope to work together with the Harrington experts to bring a product to market in less than five years,” he says.

As a physician-scientist, Dr. Kheir considers himself 100 percent clinician and 100 percent researcher and believes there is a synergy between the two. “You have to be an extremely good clinician because understanding the physiology is critical,” he explains. “You have to be a foremost expert on your clinical problem before you can propose a solution to it.”

“Research takes all of your soul. You must think about it 24/7, think outside the box and create a unique solution that no one else has thought of.”