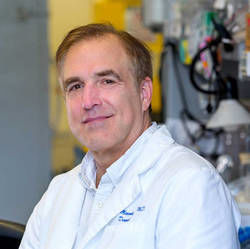 Novel Therapeutic for Disfiguring Skin Diseases such as Psoriasis

M. Peter Marinkovich, MD, Associate Professor of Dermatology at Stanford, characterizes himself as “a lab rat at heart who also loves seeing patients.” His Harrington Discovery Institute project, a potential cure for psoriasis, happily gives him time for both.

Dr. Marinkovich traces his interest in dermatology back to his three-year stint as an Army medic in the late 1970s when he treated dozens of soldiers with burns, wounds and other skin injuries. When he returned to college after the Army to complete his degree, he had the opportunity to pursue skin-related research.

By the time he entered St. Louis University School of Medicine, “I had a pretty good idea I would like to do dermatology as a specialty,” he says. With dermatology’s usually predictable office hours, it offered the added attraction of ample research time. For Dr. Marinkovich, dermatology has been the ideal combination of clinical practice and basic research.

For many years his focus in both was epidermolysis bullosa, a genetic blistering disease. In fact, Dr. Marinkovich is credited with discovering the disease’s molecular basis. The root cause of epidermolysis bullosa is a defect in a gene that encodes a protein in the skin. Through a series of biologic pathways, the mutation leads to blistering.

As Dr. Marinkovich’s research progressed, he determined that this same protein’s activity also underlies psoriasis. “When we proved that superactivating this protein caused psoriasis in mice, that’s when we knew we had something,” Dr. Marinkovich says, recalling his personal “Aha!” moment. “After that, I got fully involved in psoriasis research, and I started seeing psoriasis patients in clinic.”

Fueled by the excitement of their initial discovery, Dr. Marinkovich and his research team tested dozens of existing drugs to find one that could inhibit this protein at the molecular level. In 2014, they found that the diuretic benzamil caused “significant reversal” when given as an injection or cream. Dr. Marinkovich anticipates that with Harrington Discovery Institute’s support, he will prove benzamil’s effectiveness in human skin cells. Ultimately, this potential new product may satisfy Dr. Marinkovich’s deepest desire.

“When I retire and look back at my career, I want to feel like I made a difference. I think this project is giving me the opportunity to do that. That would make an impressive legacy for a “lab rat.”