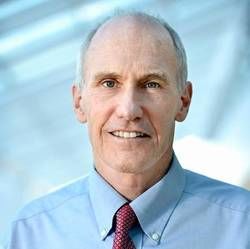 Carl June, MD is a physician scientist and the Richard W. Vague Professor in Immunotherapy at the Perelman School of Medicine at the University of Pennsylvania in the Departments of Medicine and Pathology and Laboratory Medicine.

He is the director of the Center for Cellular Immunotherapies at the Perelman School of Medicine, and the Director of the Parker Institute for Cancer Immunotherapy at the University of Pennsylvania. He is a graduate of the US Naval Academy and Baylor College of Medicine. He had graduate studies at the World Health Organization in Geneva Switzerland and postdoctoral studies at the Fred Hutchinson Cancer Research Institute in Seattle Washington.

Dr. June has published more than 400 manuscripts and is the recipient of numerous prizes and honors, including election to the Institute of Medicine in 2012 and the American Academy of Arts and Sciences in 2014, the Paul Ehrlich and Ludwig Darmstaedter Prize (shared w J. Allison), the Novartis Prize in Immunology (shared w Z. Eshhar and S. Rosenberg), the Karl Landsteiner Memorial award, the Karnofsky Prize from the American Society of Clinical Oncology, the Harrington Prize for Innovation in Medicine, the Albany Medical Prize (shared w J. Allison and S. Rosenberg) and a lifetime achievement award from the Leukemia and Lymphoma Society. He has an h-index of 141 and there are more than 72,000 citations to his publications. He is the scientific founder of Xcyte Therapies Inc. and Tmunity Therapeutics.

Dr. June maintains a research laboratory that studies various mechanisms of lymphocyte activation that relate to immune tolerance and adoptive immunotherapy for cancer and chronic infection. His laboratory developed chimeric antigen receptor (CAR) T cells that were first tested in patients in HIV/AIDS in the 1990s. In 2011, his research team published findings detailing CAR T cells targeting CD19 as a new therapy in which patients with refractory and relapsed chronic lymphocytic leukemia were treated with genetically engineered versions of their own T cells. The treatment has also now also been used with promising results to treat children with refractory acute lymphoblastic leukemia, and adults with refractory lymphoma. CTL019, the CAR T cell developed in the June laboratory was the first gene therapy to be approved by the US FDA in August 2017. The therapy developed by Dr. June’s team is now approved and marketed by Novartis in the US, Europe and Japan.

CLEVELAND, Ohio – National and international nominations are being sought for the 2022 Harrington Prize for Innovation in Medicine, which honors a physician-scientist who has moved science forward with achievements notable for innovation, creativity and the potential for clinical application.The Harrington Prize, which carries a $20,000 honorarium, is a collaboration between the Harrington... Continue Reading