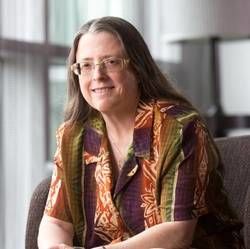 One day in 2011, after working for 21 years on therapeutics for vascular diseases, Dr. Perez made a surprising discovery in the lab. The next day her career became about Alzheimer’s disease. The remarkable discovery was that a compound she was developing to protect against cardiac ischemia turned out to offer significant benefits on cognition, learning and memory in mice.

“We were working with α1-adrenergic receptor agonists, which cause blood vessels to narrow, increasing the chances of stroke or heart failure,” Dr. Perez says.

“But once we saw the other benefits, we realized we had found a mechanism never before explored in the Alzheimer’s disease field. The task became designing a smarter drug that could uncouple the cognitive benefits from the potentially harmful effects on blood pressure.”

Dr. Perez and her team synthesized one particular compound—dubbed “Compound 3”—which did just that.

With the initial support of the BrightFocus Foundation and subsequently the ADDF-Harrington Scholar award, Dr. Perez has begun testing the compound’s effects in a preclinical model of AD. A preliminary study in mice has shown significant increases in learning and memory functions. A second, more in-depth study is now being designed.

Following this phase of the project, Dr. Perez plans to find ways to optimize Compound 3 (which is patented by Cleveland Clinic) before pursuing clinical trials in AD patients.

“With AD becoming more rampant, my impact wish is to have a drug with the potential to help many millions of people, not just help with symptoms, but management of disease, perhaps even repairing neurons that are being lost.”