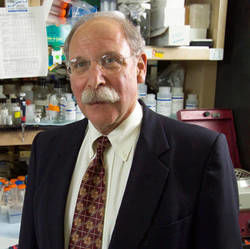 Development of a Novel Class of Analgesics - More Potent than Morphine, but Lacking the Negative Side Effects and Abuse Potential

As a young medical student at Johns Hopkins, Gavril Pasternak, MD, PhD, discovered in himself an innate love of research that has continued to motivate him for 40 years. “Research is like a giant mystery novel that never stops,” he says. “Every time you think that you have the answer, Nature explains that you are not as smart as she is. As you go on, the problems get more interesting.”

As a cancer physician, Dr. Pasternak, the Anne Burnett Tandy Chair of Neurology at Memorial Sloan Kettering Cancer Center, is moved by the suffering of patients who need pain relief. As a scientist, he is intrigued by the question of whether the positive effects of the opiate drugs frequently prescribed for cancer pain could be separated from their known negative effects.

He is all too familiar with pain and its impact. “The best treatment for pain is to take away its source, but we can’t always do that,” he explains. “The next best thing is to relieve their suffering as much as possible. But pain can become so overwhelming that the person cannot enjoy life, and that is a tragedy.”

For four decades, Dr. Pasternak has pursued research to advance the understanding of pain and the opiate drugs used to treat it. The National Institutes of Health (NIH) has funded his work since 1979 through the National Institute on Drug Abuse, and he and his team have published extensively in medical journals about how pain drugs work so that they can be used more effectively.

Through this body of work, Dr. Pasternak has gained intimate knowledge about the risks and side effects associated with opiates, ranging from dizziness, nausea, vomiting and constipation to addiction and breathing problems. Yet, with a dearth of new painkillers coming on the market, opioids like hydrocodone and morphine are among the most frequently prescribed painkillers for everything from oral surgery to cancer.

Dr. Pasternak set out to develop an alternative – a painkiller as effective as the opiates without the nasty side effects. Now, he and his team have generated in the laboratory what they believe may be the answer – a new class of drugs derived from opiates that block pain signals in the brain without the risks.

The next step in their research is to identify the best targets in the brain for the compounds they have created. Through the support of the Harrington Discovery Institute, Dr. Pasternak is hopeful that the research team will be able to progress several of the compounds to clinical trials.

Dr. Pasternak’s deep personal commitment to making a lasting impact on the future is apparent when he speaks of his involvement with the Harrington Discovery Institute as the culmination of 40 years of research. He says simply, “I get enormous personal fulfillment from the knowledge that we can do something to make a difference.”

“The Harrington grant provides an opportunity to explore new drugs in a way that the NIH wouldn’t support.”