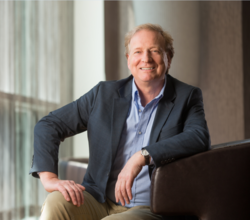 In the Harrington Discovery Institute, Dr. Marshall has found scientists and drug development experts well-suited to his pragmatic approach to his work.

"The great thing about Harrington is that they didn't need to know everything about how our drug worked - it was enough that it showed clear potential to benefit children with Angelman syndrome," Dr. Marshall says.

Angelman syndrome (AS) is a severe neurogenetic disorder that affects thousands of children each year, characterized by developmental and intellectual disability, seizures, balance difficulties and other problems.

Long-term potentiation (LTP) is a persistent strengthening of synapses based on recent patterns of activity, a phenomenon believed by many neuroscientists to underlie learning.

AS arises from flaws in a gene called Ube3A, which in the brain normally limits the amount of a protein called Arc. Left unchecked, Arc thwarts the neuron signaling which is critical for LTP.

"Receptors are key elements in the communication of neurons, and by studying them we hope to understand at the molecular level how the brain functions," Dr. Marshall says. "So, as often happens in science, the progress we're making with a rare disease could lead to novel approaches for common illnesses - in this case, depression - a condition afflicting more than a quarter of a billion people worldwide."

“Harrington funding allowed us to gather the data proving that our drug could get past the blood-brain-barrier."