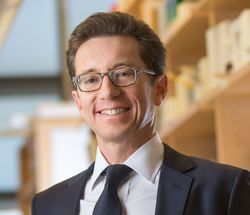 To learn more about Harrington Investigator, Jonathan Stamler, click the button below.

Oxford, UK and Cleveland, Ohio, USA – 28 February 2019 – The University of Oxford and University Hospitals in Cleveland, Ohio, today announced a multi-year affiliation to establish a global center for rare diseases. The Oxford-Harrington Rare Disease Centre will bring together the capabilities, resources and expertise of both institutions to deliver new treatments for rare diseases, for which... Continue Reading

Crain's Cleveland Names Who's Who in Politics, Business, and Philanthropy in the Region

From CEOs and politicians to philanthropists and entrepreneurs, Crain’s Who’s Who list is just a snapshot of those making an impact on Northeast Ohio. There were no specific criteria used, but our editorial team huddled and determined which leaders we thought every person doing business in the region should know. Special consideration was given to those who go well beyond their official roles... Continue Reading

CLEVELAND – Harrington Discovery Institute at University Hospitals in Cleveland, Ohio and the Alzheimer’s Drug Discovery Foundation (ADDF) have expanded their collaboration to accelerate translation of innovative research efforts for Alzheimer’s disease. Together, the two organizations will jointly market and administer a new award program for academic researchers. By leveraging their... Continue Reading

Cleveland – The Trustees of the Burton D. Morgan Foundation in Hudson Ohio have awarded a grant of $200,000 to the Harrington Discovery Institute at University Hospitals in Cleveland, Ohio to support the Institute’s Innovation Support Center (ISC) and its mission of mentoring physician-scientists to advance novel discoveries into new drugs that improve human health.The Harrington Discovery... Continue Reading

For the past decade, venture philanthropists have been working to propel promising therapies and vaccines into the clinic, with some success.Venture philanthropist Bill Gates looks on as a health worker vaccinates a child in GhanaIn December 2015, Facebook founder Mark Zuckerberg and his wife Priscilla Chan made a stunning announcement. In a letter to their newborn daughter, the couple pledged to... Continue Reading

Dr. Jonathan Stamler, director of The Harrington Discovery Institute at University Hospitals in Cleveland, has earned a reputation as a “genius.”“Some people are geniuses,” his fatherâinâlaw Norman Wain said. “Geniuses have a capacity to work.”“He has this sort of infectious personality to want to drive scientists to not just make discoveries, which is great, but you... Continue Reading

INDIANAPOLIS— A group of researchers led by Indiana University School of Medicine’s , has been awarded a research program project grant (P01) from the National Heart, Lung and Blood Institute. The award amounts to just over $12 million over the next five years and will fund the development of personalized therapeutic approaches for severe asthma.Severe asthma is one of the most common and... Continue Reading

A Prescription for Exercise: Scientists Want to Help You Find the Best Workout for Your Brain

Jonathan Stamler, MD, President and Investigator of Harrington Discovery Institute, and his colleagues are currently developing an exercise wearable to help personalize exercise to minimize the risks of dementia.Research reveals that exercise is beneficial not just for the body, but also for the mind. According to the , exercising for 30 minutes five times a week can lower one’s risk of... Continue Reading