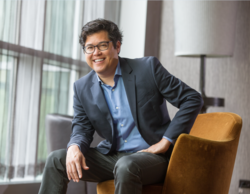 Amyotrophic lateral sclerosis (ALS) causes the death of neurons controlling voluntary muscles. The disease onset is usually around age 60 and is typically fatal within two to four years. No cure is known - the goal of treatment is to improve symptoms.

More than 40 diseases are caused by expansions of simple sequence repeats dispersed throughout the human genome. The most common cause of ALS, as well as frontotemporal dementia (FTD), is the GGGGCC repeat expansion in C90RF72, a gene that provides instructions for making a protein that is found in various tissues. This repeat expansion causes the buildup and clumping of proteins, which in ALS leads to death of nerve cells.

"The nerve cell has difficulty degrading these clumps, which disturb many of the normal functions of the cell, leading to cell death," Dr. Ichida says. "We screened thousands of chemicals to target C90RF72, and found that inhibiting the protein PIKFYVE lowers levels of these clumps in nerve cells."

"There are many forms of ALS and FTD, and historically, specific forms have been targeted individually," Dr. Ichida says. "PIKFYVE, which has never been a therapeutic target tested for neurodegeneration, is unique because it could work on multiple forms of both diseases."

“Our Harrington team advised us that a DNA drug could be safer than a small molecule, a direction that made a huge different to our work."