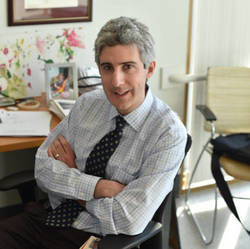 If you were to write a movie about a doctor who became dedicated to preventing osteoporosis, it’s likely that your script would follow a progression similar to Dr. Wein’s career. As a grad student he became interested in bone biology, getting his PhD in immunology. After med school, as an endocrinologist Dr. Wein began treating many patients with osteoporosis, and before long realized that current treatments weren’t the answer.

“Most current treatments slow the rate at which bone tissue breaks down,” Dr. Wein says. “One drug, parathyroid hormone (PTH), forms new bone, but must be injected daily. That’s a major downside, as most people simply won’t inject every day for a condition that has no apparent symptoms.”

In the lab he noted that the actions of PTH in bone involve a signaling cascade that turns off salt-inducible kinases (SIKs). After several years of research, Dr. Wein’s team, with help from collaborators at the Dana-Farber Cancer Institute and the Broad Institute, found that a small molecule SIK inhibitor, YKL-05-099, builds new bone by mimicking the effects of parathyroid hormone. They also found that, in mice, this inhibitor reduced levels of the cells responsible for bone breakdown—meaning that small molecule SIK inhibitors could potentially stimulate bone formation and suppress bone resorption.

“As common as osteoporosis is, with help from the Harrington Discovery Institute, we may be able to turn this new knowledge into a blockbuster drug that would help millions,” Dr. Wein says.

“By 2033 there will be more Americans over 65 than under 18. I hope that well before then, simply by taking a pill, older people will be able to avoid broken bones, staying more whole, healthy and active.”