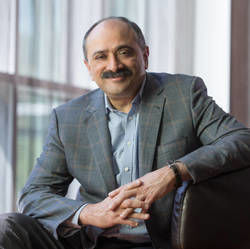 What if a drug was developed that was capable of reducing both osteoporosis and obesity? Although such a drug may be a few years from being a reality, the story of Dr. Zaidi’s work made its way to the New York Times, as well

as prestigious journals like The New England Journal of Medicine and Cell Metabolism and was selected by Nature Medicine as one of the top eight Notable Advances in biomedicine for 2017.

“In studying how the follicle-stimulating hormone (FSH) affects bone mass, we found that it is also tied to a characteristic redistribution of weight to the abdomen,” Dr. Zaidi says. “In mouse studies we found that blocking the hormone not only increased bone mass, but increased the calories burned, reduced body fat, and even encouraged physical activity.”

With support and guidance from the Harrington Discovery Institute, Dr. Zaidi will be studying the efficacy and safety of monoclonal antibodies designed to block FSH, which show remarkable promise in animal studies.

The most obvious target audience is post-menopausal women who typically lose bone mass and gain weight—yet the implications are potentially vastly broader, for men as well.

“Imagine a single agent capable of mitigating or preventing not one, but two of the most ubiquitous conditions the world over: obesity and osteoporosis.”