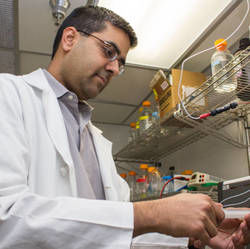 Development of a Novel Approach to Circumvent Bacterial Antibiotic Resistance in Diseases, such as Cystic Fibrosis, Tuberculosis and Hospital-Acquired Infections

Harrington Scholar-Innovator Rahul Kohli, MD, PhD, has had a problem on his mind since medical school at Harvard. “Thinking about the problem of drug resistance was in my head then. I already knew we needed a new approach,” he explains. During his doctoral studies in biochemistry at Harvard where he worked on understanding many of the antibiotics in common use today, the innovation gap was obvious to him. The idea stayed with him through his training.

Now Assistant Professor, Division of Infectious Disease, Departments of Medicine and Biochemistry and Biophysics, University of Pennsylvania Perelman School of Medicine, Dr. Kohli four years ago decided it was time to pursue his passion. ”Starting by setting aside the belief that drug resistance by microorganisms is inevitable was the launching point for our program,” he says.

The typical, accepted approach to preventing resistance to antibiotics is to modify the antibiotic, he explains. In response, the bugs mutate again, and there is a never-ending battle between superbugs and new antibiotics. “We have just been running to stay in place when it comes to trying to combat antibiotic resistance,” Dr. Kohli says.

Turning the problem over in his mind while treating his infectious disease patients, Dr. Kohli was drawn toward a totally different solution.

Instead of trying to build a better antibiotic, he asked, why not focus on the bugs’ ability to acquire resistance instead? The research project he will pursue as a Harrington Scholar-Innovator aims to target the very pathways in the bacteria that let them adapt to antibiotics and evolve resistance.

“We hope to identify a molecule that can disrupt the pathway that allows bacteria to acquire drug resistance,” Dr. Kohli explains. His ultimate goal is to develop a drug that could make bacteria more sensitive to existing antibiotics or slow or prevent them from acquiring antibiotic resistance. Either approach would have value in clinical applications.

The idea of going after the superbugs by targeting their evolution “has been floating in the field for some time,” he adds. His lab’s work has helped to isolate a target that might make this strategy possible, and their work caught the attention of the Harrington Discovery Institute selection committee. “The committee members are aware that infectious disease is a field with a desperate clinical need,” Dr. Kohli says. “They saw our proposal as an out-of-the-box idea that is simultaneously founded on solid science.”

At almost the same time last year as the Harrington Discovery Institute was reviewing Dr. Kohli’s proposal, pharmaceutical giant GlaxoSmithKline was evaluating the concept in its Discovery Fast Track competition. Glaxo selected Dr. Kohli as one of eight winners in the competition and will provide support for some of the work in his lab.

His laboratory also is gaining renown for parallel research under way to identify the role of purposeful mutations on the other side of the host-pathogen divide. The team has published several articles in scientific journals about how the immune system uses such mutations to strengthen itself.

For Dr. Kohli, what sets the Harrington Discovery Institute apart from other awards is the group of scientists and industry experts it has collected to move drug discoveries forward. “We are grateful for as much advice as we can get.”

“It’s a daunting task to translate an academic idea to the clinical and practical realm.”