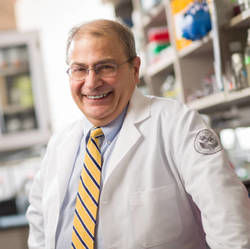 The need to take care of patients is deeply embedded in the soul of Robert A. Bonomo, MD. As an Infectious Diseases specialist at the Louis Stokes Cleveland VA Medical Center, where he is also Chief of the Medical Service, his patients are some of the sickest, usually with poor immune systems, often with multiple medical problems, complicated by one or more bacterial infections.

When he isn’t taking care of patients, Dr. Bonomo is in his lab, laboring to develop a new, better treatment for infections. “I need to do something to help people,” he says, explaining his dedication to both the clinic and the lab. “The best part of my field is the connection between bedside and bench. I get samples from the patient, take it to the lab and dissect it down to find out why this organism is antibiotic-resistant.”

Dr. Bonomo, who is also Professor of Medicine, Pharmacology, Biochemistry, Molecular Biology and Microbiology at Case Western Reserve University School of Medicine, has participated in the development of four drugs that are now available commercially. He believes he is on the verge of a potential fifth drug discovery with his current research project, a new beta-lactamase inhibitor. These inhibitors are commonly given with beta-lactam antibiotics like penicillin derivatives and cephalosporins to prevent the bacteria from developing drug resistance.

A high-energy, direct-speaking man born in the Bronx in the shade of Yankee Stadium, baseball players like Mickey Mantle and Yogi Berra were the idols of his youth. A career in medicine was not even on his radar. An indifferent student through high school, he did not excel during his undergraduate career at Hamilton College. It wasn’t until he was married and working at New York University that he first considered a medical career.

There, he encountered a physician-scientist who was dedicated to taking care of his patients and to developing a vaccine. For the first time, the young Robert Bonomo visualized a new world of opportunities. He enrolled at Case Western Reserve University School of Medicine at the age of 25.

As a resident at University Hospitals, he met physician-scientist and microbiologist David Shlaes, MD, PhD, and the course of his future was set. “I ended up returning for an infectious disease fellowship and became a research fellow working under Dr. Shlaes,” Dr. Bonomo recalls.

Twenty years later, he hasn’t lost his love for basic science or his zest for patient care. Managing both puts demands on his time and energy, but Dr. Bonomo thrives on it. “I can’t imagine my life without this blend of clinical and research activities.”

“The best part of my field is the connection between bedside and bench.”