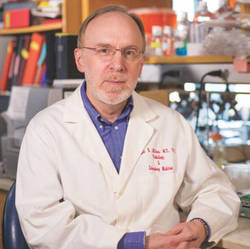 Physician, molecular geneticist, philosopher, composer – Robert B. Wilson, MD, PhD, professor and pathologist at the Hospital of the University of Pennsylvania, is a unique blend of scientist and artist.

As an undergraduate at Brown University, “I was thoroughly into music, but I became enamored of science and medicine,” Dr. Wilson recalls. He decided to stay a fifth year at Brown to further his music and philosophy studies and learned he also could complete a biochemistry degree by taking just two more science classes. At the end of his fifth year, he graduated with degrees in music and biochemistry, both with High Honors.

His eclectic undergraduate pursuits yielded not only a collection of original musical compositions but also a place in the MD/PhD program at the University of Pennsylvania. He completed his training there with a residency in clinical pathology and a fellowship in transfusion medicine, culminating in a faculty appointment in molecular pathology.

The discovery of microRNAs in the early 1990s fired his imagination as he considered the possible therapeutic uses of these short-chain nucleic acids. By regulating gene expression, microRNAs play a key role in diverse biological processes, including cell proliferation, differentiation and death.

Dr. Wilson’s first work with microRNAs investigated their potential therapeutic application in Friedreich’s ataxia, a rare neurologic condition on which he is an internationally recognized expert.

For the past year, Dr. Wilson and his team have turned their attention to the potential to use shRNAs, artificial versions of microRNAs, in cancer treatment. They are searching among three million shRNA sequences to identify the ones that specifically suppress cancer cell growth. The work is painstaking, dealing with 30 million lines of data on spreadsheets, repeating tests, identifying target gene sequences.

Dr. Wilson is driven to find shRNAs that are toxic to cells that lack a tumor suppressor. Such a discovery could lead to small-RNA therapeutics or identify possible therapeutic targets to disrupt cancer cell growth and multiplication. To date, he and his team have found shRNA sequences that may specifically inhibit prostate cancer cells.

“It opens the door to the possibility of a personalized mix of drugs for prostate cancer determined by each tumor’s genetic profile,” Dr. Wilson explains. “Another possibility would be using an shRNA to enhance the specificity of current drugs to make them more curative or less toxic.”

Although Dr. Wilson characterizes himself as “an empirical skeptic,” he believes that his team’s discovery is worth taking further. His Harrington Discovery Institute Scholar-Innovator grant will help him to optimize his approach, which he anticipates eventually will lead to the discovery of shRNAs specifically toxic to cancer cells. Although this work is still in its early stages, he is convinced that shRNAs hold the potential to yield a breakthrough in cancer treatment.

“Bringing knowledge from basic science in the laboratory to making a difference in human health. That’s what gets me up in the morning. I fundamentally love what I am doing.”