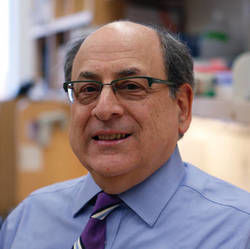 Fetal hemoglobin, the form of hemoglobin naturally present in an infant from the second month of gestation through the first six months of life, inhibits the collection of abnormal hemoglobin found in sickle cell disease. Certain natural compounds, such as those derived from marine microbes, have been observed to disrupt the biologic pathway that suppresses fetal hemoglobin production.

With support from Harrington Discovery Institute, the Orkin laboratory aims to purify and characterize the biologic activity of two natural extracts that reactivate fetal hemoglobin by interfering with the function of a protein that normally contributes to fetal hemoglobin silencing.

“Years of intensive basic science have laid the foundation for the work we are doing now. This is the culmination of three decades of molecular biology work.”

Dr. Stuart H Orkin is the David G. Nathan Distinguished Professor of Pediatrics at Harvard Medical School, and an HHMI Investigator at Boston Children’s Hospital. Orkin has defined the molecular basis of human blood disorders and mechanisms governing blood cell development. Previously he served as Chairman of the Department of Pediatric Oncology at the Dana Farber Cancer Institute from 2000-2016. He received a BS from MIT and an MD from Harvard Medical School. Dr. Orkin served on the National Research Council Committee on Mapping the Human Genome and as co-chair of the Panel to Assess the NIH Investment in Gene Therapy. He was the inaugural chair of the Grants Reviews Committee of the California Institute of Regenerative Medicine (CIRM).

He provided the first comprehensive molecular dissection of an inherited disorder (the thalassemia syndromes), and characterized genes responsible for other human blood disorders, including X-linked chronic granulomatous disease (the first positional cloning). Orkin identified the first hematopoietic transcription factors (the GATA family) and characterized their roles in blood cell development and cancer. His studies of BCL11A, a repressor of fetal hemoglobin (HbF), have illuminated regulation of globin gene switching and improved prospects for HbF reactivation as therapy of the thalassemias and sickle cell disease.

Dr. Orkin was elected to the National Academy of Sciences (NAS), National Academy of Medicine (NAM), American Academy of Arts and Sciences, and the American Philosophical Society, He received the E. Mead Johnson Award, Warren Alpert Prize, Helmut Horten Foundation Prize, Distinguished Research Award from the Association of American Medical Colleges (AAMC), E. Donnall Thomas, Dameshek and Basic Science Mentor Awards of the American Society of Hematology (ASH). He received Jessie Stevenson Kovalenko Medal of the NAS for "important contributions to the medical sciences"(2013), the William A. Allan Award of the American Society of Human Genetics (2014), the George M. Kober Medal of the American Association of Physicians (2018), the Mechthild Esser Nemmers Prize in Medical Science of Northwestern University (2018), and the King Faisal Prize in Medicine (2020).

CLEVELAND, Ohio – National and international nominations are being sought for the 2022 Harrington Prize for Innovation in Medicine, which honors a physician-scientist who has moved science forward with achievements notable for innovation, creativity and the potential for clinical application.The Harrington Prize, which carries a $20,000 honorarium, is a collaboration between the Harrington... Continue Reading