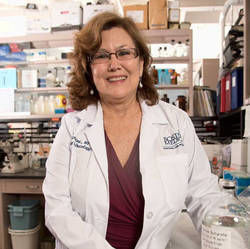 “I was working in Saudi Arabia on a public health project on trachoma, an infectious, blinding eye disease that affected many infants there,” she remembers. “I also learned that sickle cell disease also was prevalent in the oasis region. Normally it is a serious blood condition, but the patients were not sick because they had adapted by producing large amounts of fetal hemoglobin.” High levels of fetal hemoglobin – the oxygen-carrying component of blood in infants before birth – are known to protect against many problems in sickle cell disease and beta thalassemia. Usually by the time a baby reaches 6 to 12 months of age, fetal hemoglobin production declines significantly, and adult hemoglobin replaces most of the prenatal form.

“American physicians caring for families in the region were collaborating with Oxford scientists on the mystery of how fetal hemoglobin persisted in the population,” Dr. Perrine continues. “I was charged with carrying blood to London for studies on what seemed an important mission.” Her experience in Saudi Arabia led her ultimately to pursue a fellowship in pediatric hematology-oncology at Boston’s Dana-Farber Cancer Institute.

As a fellow, she treated many children who were very sick with sickle cell disease or beta thalassemia. “It bothered me that the fetal hemoglobin gene (that produces the hemoglobin protein) turns off on a fixed developmental timetable, allowing mutant genes to turn on and cause disease,” she says. Years later, the innate remedy for these two blood diseases still inspires her search for a therapeutic to reproduce “nature’s cure.”

Now a hematologist-oncologist at Boston University School of Medicine, she is close to developing a medication to restore fetal hemoglobin production. But advancing the latest therapeutic to the clinic has been fraught with challenges. “I have traveled between the bench and the bedside a couple of times,” Dr. Perrine says. Two compounds appeared promising in the laboratory, but the first required intravenous injection and the second had more favorable properties, but was less active in some patients.

Back at the bench, she discovered a higher-potency oral drug that is approved for another condition, with a benign safety profile. But, the U.S. Food and Drug Administration is requiring many additional tests because test standards expanded since this drug was first approved.

She has completed some required testing, but came to a halt due to lack of funding. At this point, Dr. Perrine admits she feels thwarted. “Having to stop is very frustrating,” she says. “We know how to streamline clinical trials in these diseases. With funding, this drug could be in patient trials within a year.”

She is looking to Harrington Discovery Institute to help complete the FDA-required testing to initiate clinical trials. She already can visualize the difference treatment can make for patients. “Patients’ health is continuously deteriorating in these diseases,” she says. “To treat them by reactivating this innate gene would make the difference between really helping to prevent the damage compared to relieving pain, but not stopping the damage.”

“I want to develop this,” Dr. Perrine says with determination. “I want to get something to patients that will truly make a difference.”