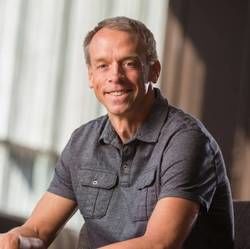 Dr. Dunckley is investigating tau protein in the brain as a viable therapeutic target in Alzheimer’s disease. Tau protein is known to undergo numerous abnormal chemical modifications, caused in part by the enzyme DYRK1A. The aberrant proteins stick together to create neurofibrillary tangles, a hallmark of Alzheimer’s disease. The tangles disrupt neurons’ normal activities, block signals between neurons and eventually cause neuronal death. Formation of amyloid plaques in the brain, another characteristic of Alzheimer’s disease, precedes tangle formation and is believed to exacerbate their development and also contribute to neuronal death.

Dr. Dunckley and his team have identified a DYRK1A inhibitor that reduced tau proteins by 40 percent and amyloid plaques by 50 percent in preclinical models. Dr. Dunckley is seeking expert guidance from Harrington Discovery Institute’s Innovation Support Center experts on the metrics needed to interest a pharmaceutical company or other investor and progress this small molecule DYRK1A inhibitor to the clinic.

“Alzheimer’s is such a horrific disease, and there is a huge need for effective treatments because none are currently available. DYRK1A is a relatively new and promising target that directly addresses the underlying pathologies of this disease.” “Once the cascade begins in the brain with the modification of the tau proteins and neuronal death, it is difficult to reverse the changes. That is why we are targeting the underlying process – the aberrant phosphorylation of the tau proteins – that initiates the cascade.” “At this stage, meeting with knowledgeable advisors from Harrington will be the next measure of our success.”

“The experts associated with Harrington are extremely valuable because of their market awareness and knowledge of the commercial aspects required for successfully advancing a new molecule to the clinic. As an academic scientist, that part of drug development is totally unknown to me.”